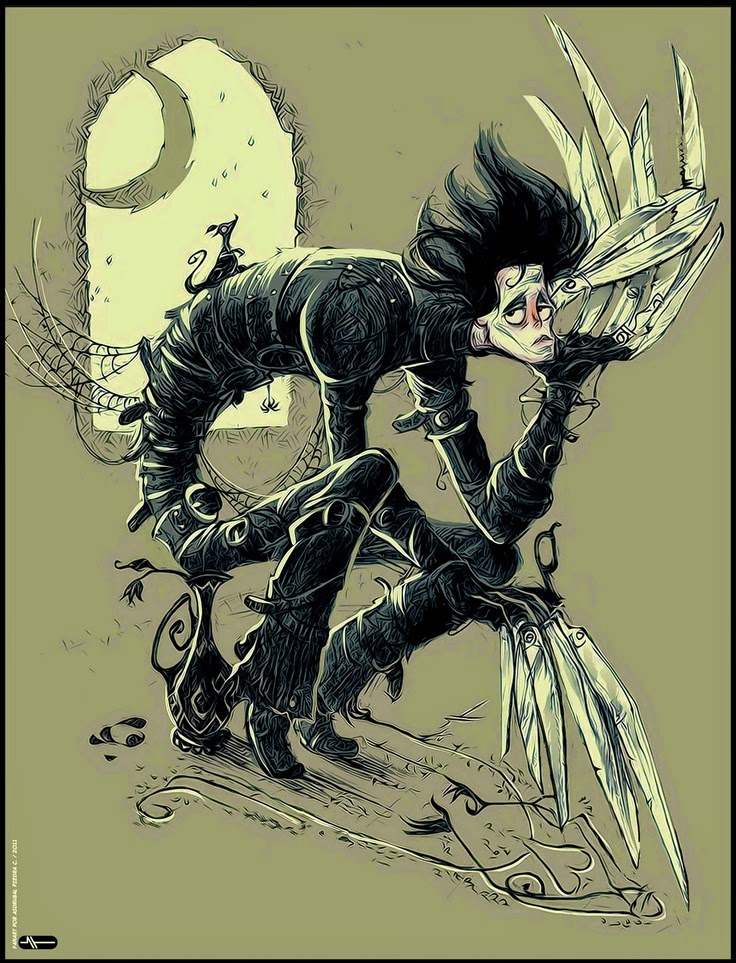 Asdrubal Piedra from Costa Rica bring this lovely vision of Edward's loneliness.
Be sure and check Asdubal other cool stuff via http://shadowness.com/asdrubalpc/illustration

A great movie scene when Edward is making the T-Rex topiary! Alex Leighton bring again a great artwork! It's been a while since I haven't post a contribution and I'm so glad to be back With Alex's pieces! 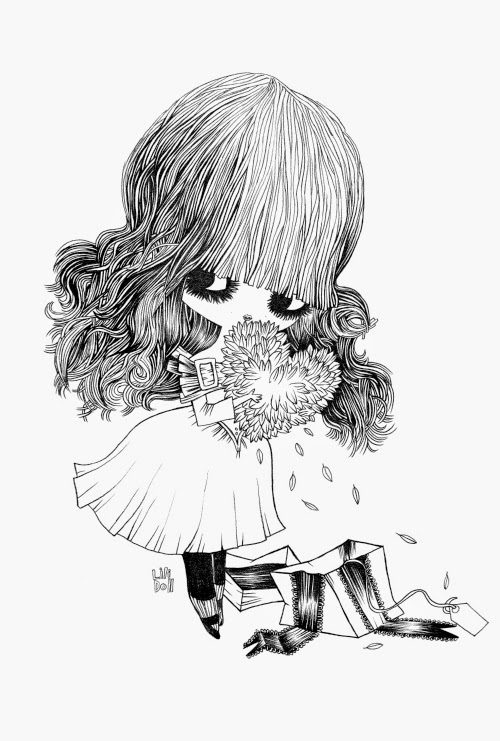 Lilidoll is the creator of such charming works and her piece is a beauty, what a lovely gift for Kim and us! 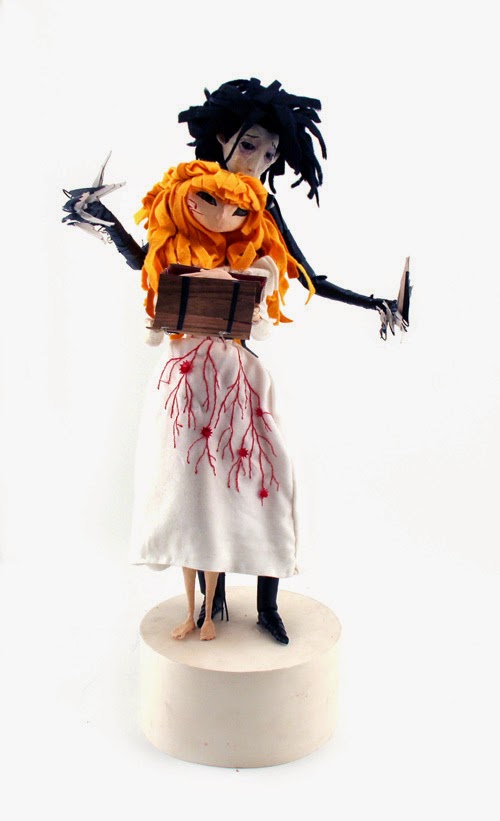 My dear Patricia Michel did theses fantastic Dolls for the tribute and spent how many hours working on all the details to create this magical piece!

You can visite the new blog of Patricia just here. 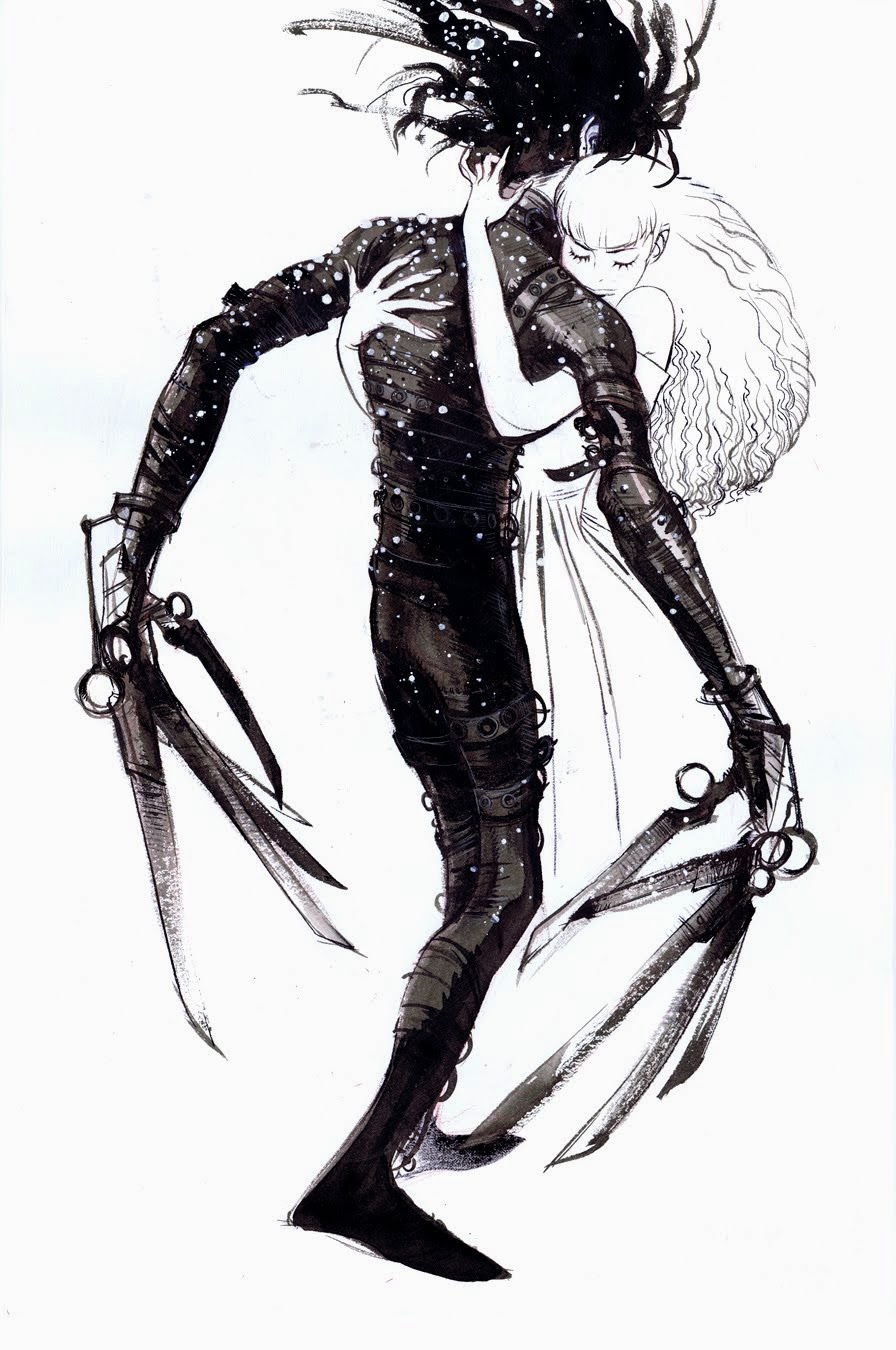 I really love this piece from Mindy Lee... Simply great!

Visite Mindy via her blog! 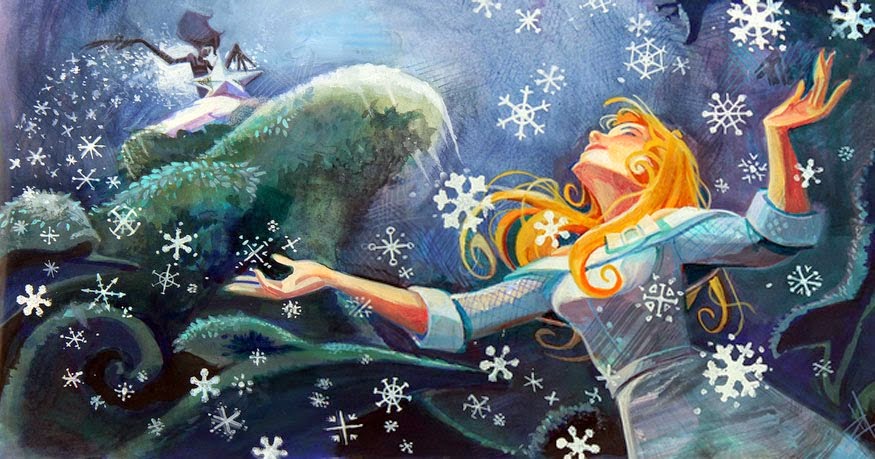 I get the chance to meet Zane Yarbrough during the show an artist to follow, I was really happy to have him contributinge with this fantastic piece!!

Visite zane through his page!

Edward and his topiary 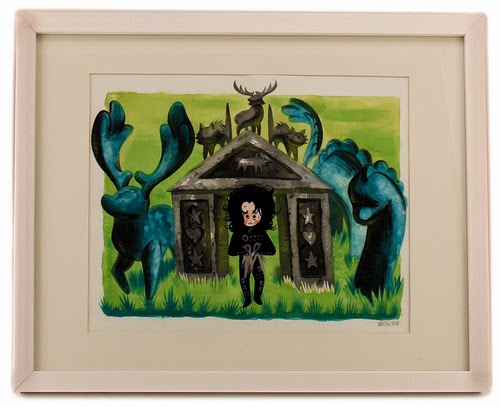 Becky Dreistadt is a wondeful artist her style remain me the golden books I loved and love so much as a kid! This piece is simply a pure wonder and I'm feeling honored having Becky contributing to the blog.

Benjamin Lacombe is the creator of magic books and I'm honored that he could take the time to contribute with this pure beauty! 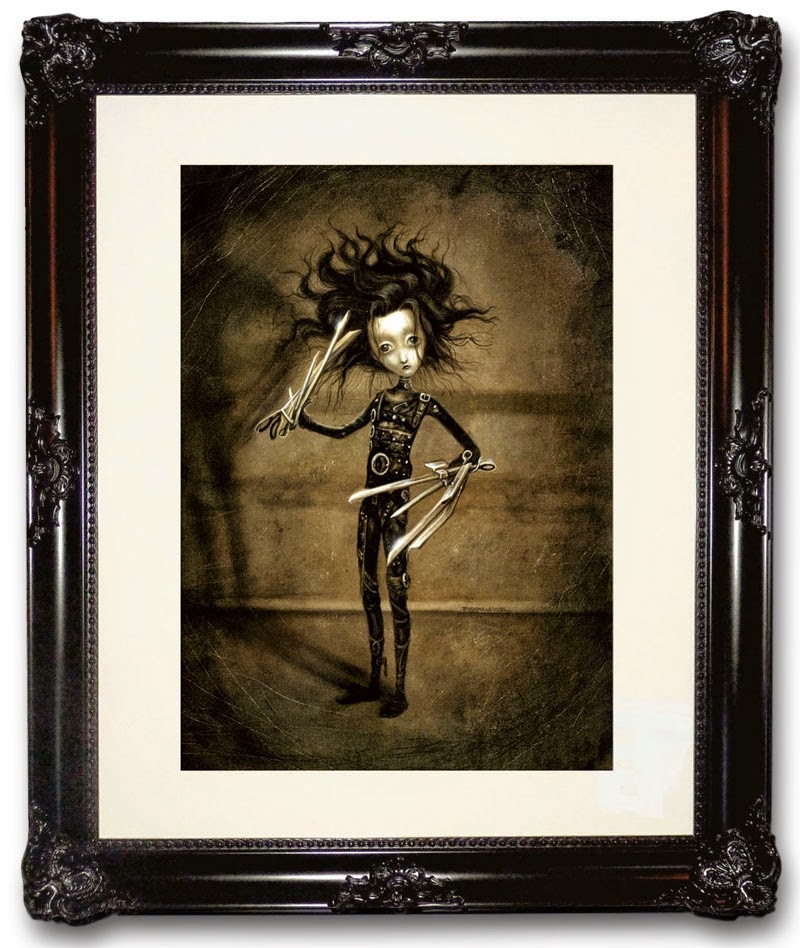 Visit the haunting alley of Benjamin Lacombe via his site and blog. 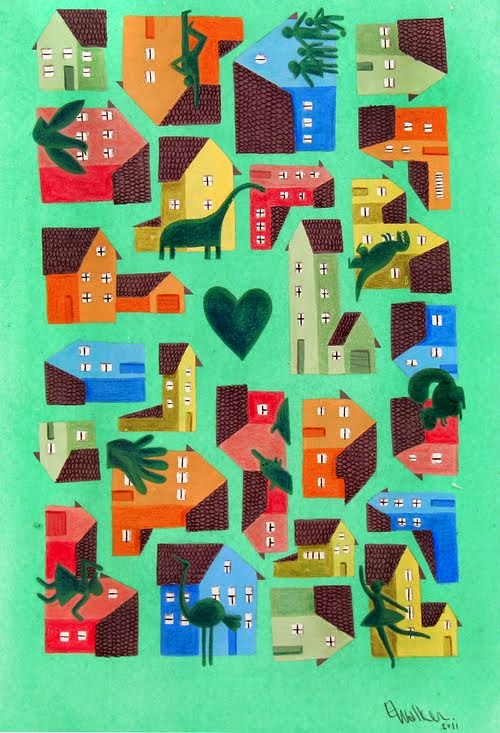 I really like this graphic quilt by Emmanuelle Walker. I invite you to visit Emmanuelle's lovely blog for much more. 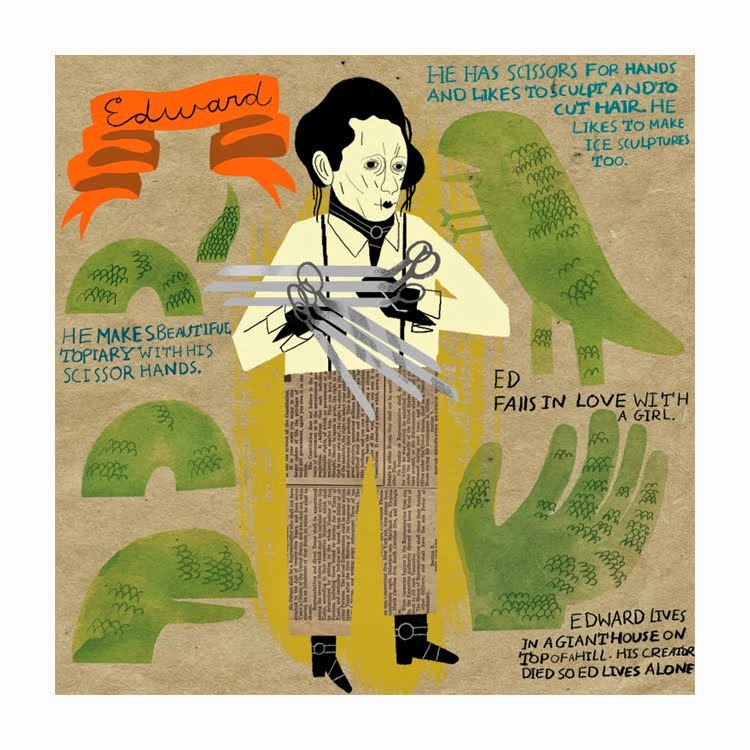 Dan Bob Thompson is the creator of marvellous works and It was so cool to have Dan present during the Scissorhands show!
Don't wait any longer and twist by Dan's site and blog. 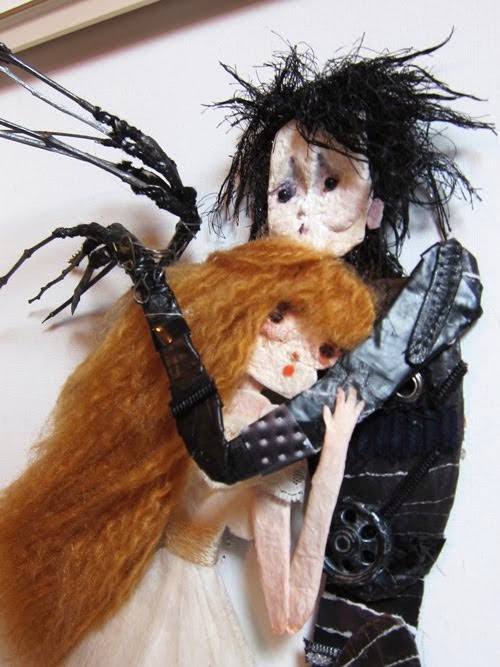 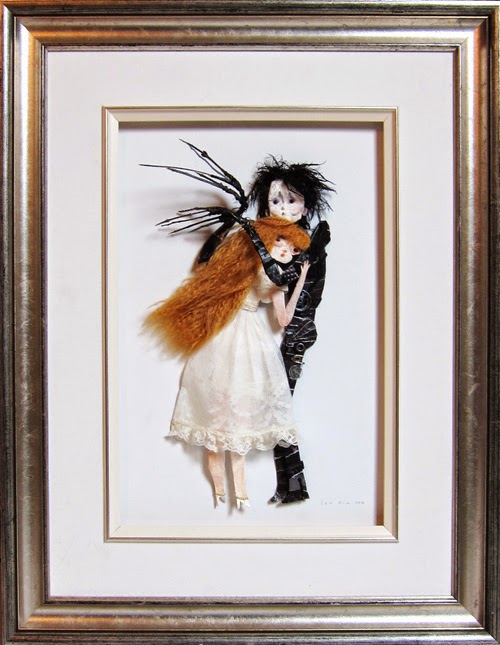 Seo Kim is not only an amazing draw maker she's also a complet artist. Her piece I think is one of the pieces I will keep in mind from the project, It's simply wonderfull!!! 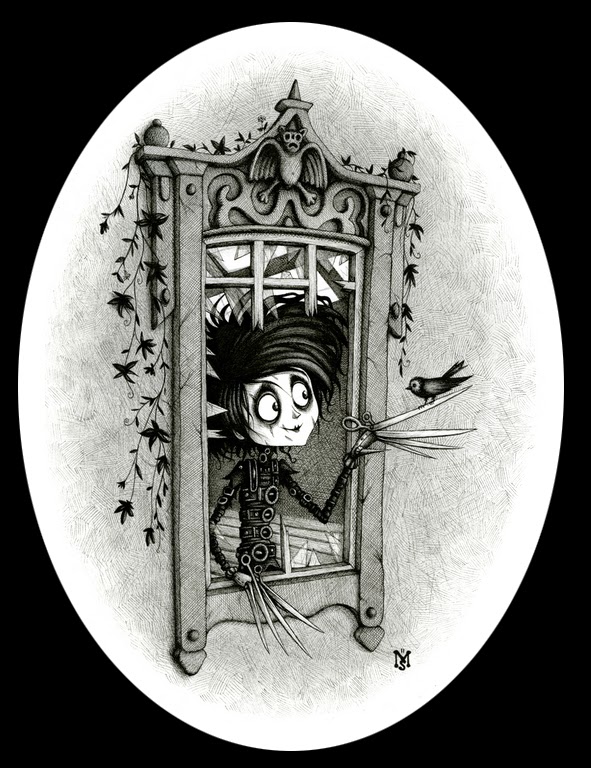 Here is my second and last piece for the tribute.... The show will be tonight 7pm at Nucleus Gallery, if you are around come to see great art and say hello!


I will post more pieces and photos from the show when I'll be back home.
Thanks everyone for following this blog tribute and thanks to all the wonderful artists who contributed to this fantastic adventure!!! 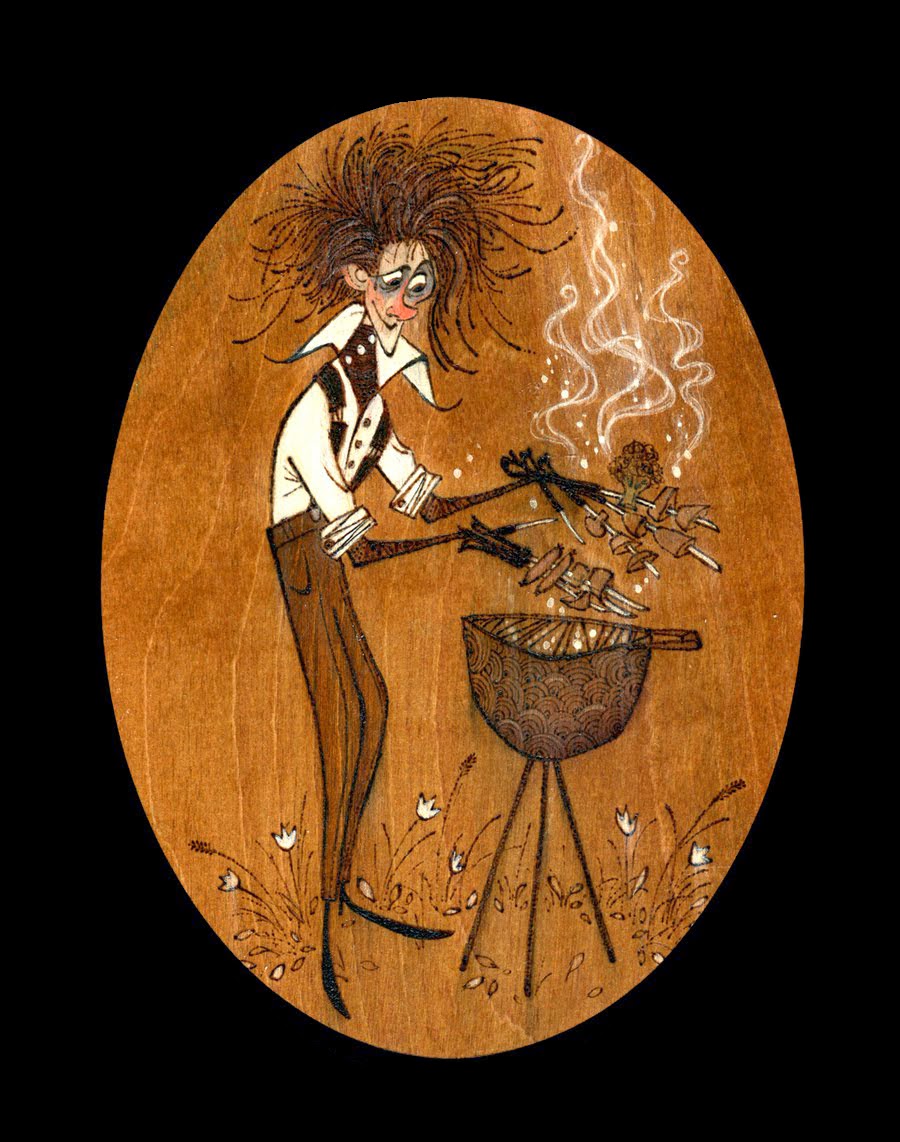 How i love Zar Galstian works and her wooden piece is already one of my favorite!!

Zar is one of the rare and so talented artist at Disney and I invite you to visit Zar Galstian blog for more. 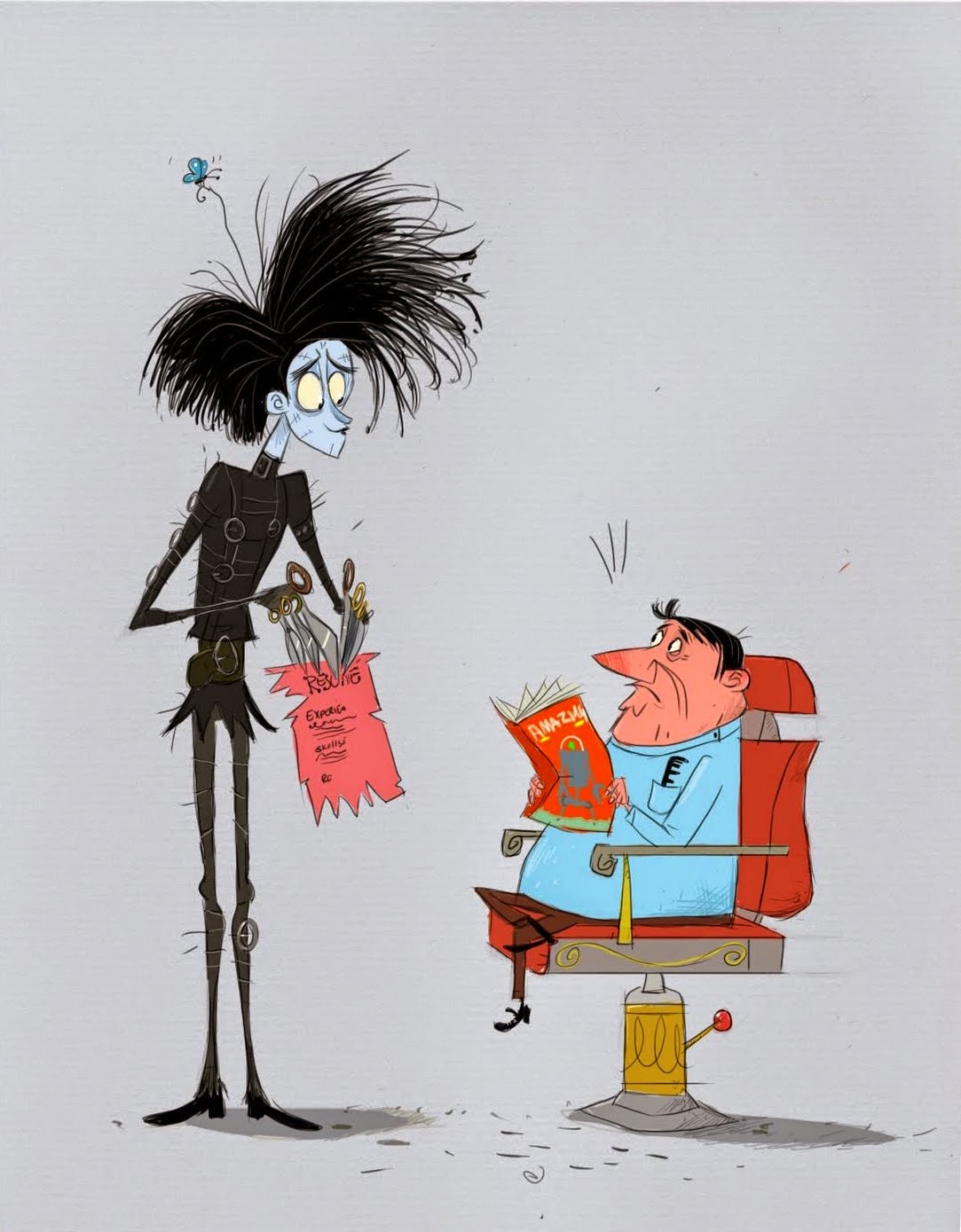 I'm a hug fan of Colin Jack works and I'm so glad to have Colin contributing to Scissorhands20th with this great piece!! Be sure and visit Colin's page. 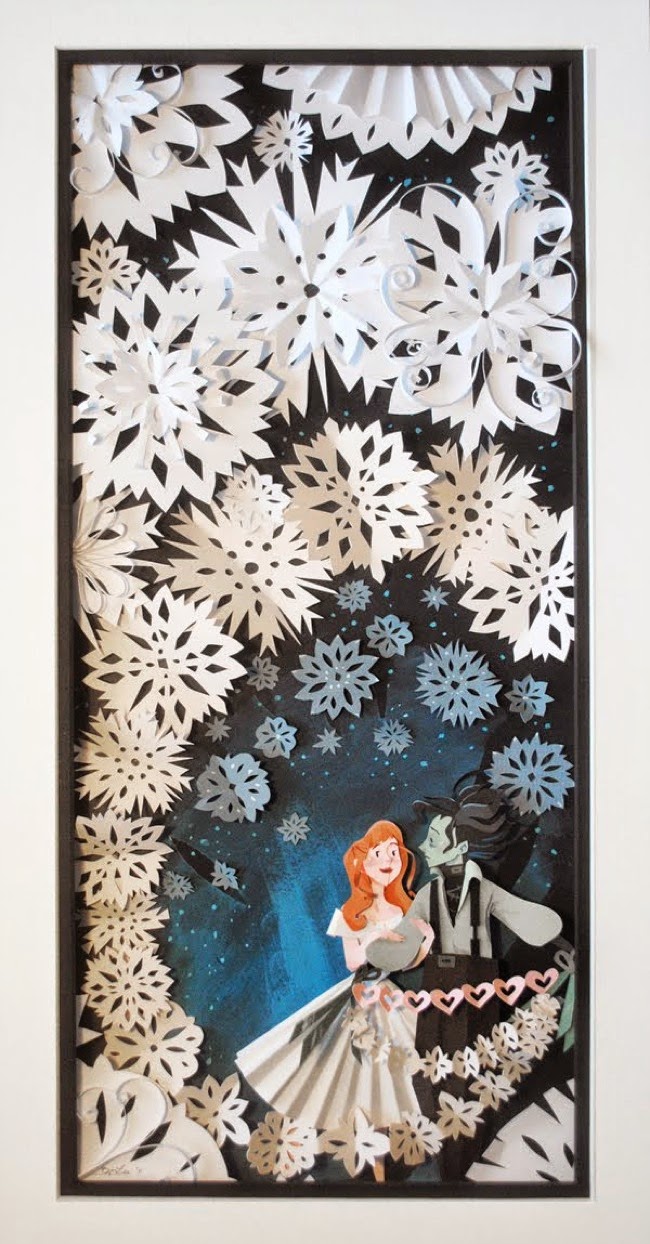 Brittney Lee is one of my favorite artists and her "First snow" piece, made of paper cut and gouache is simply a pure beauty!!!

See how wonderful Brittney works is through her Blog! 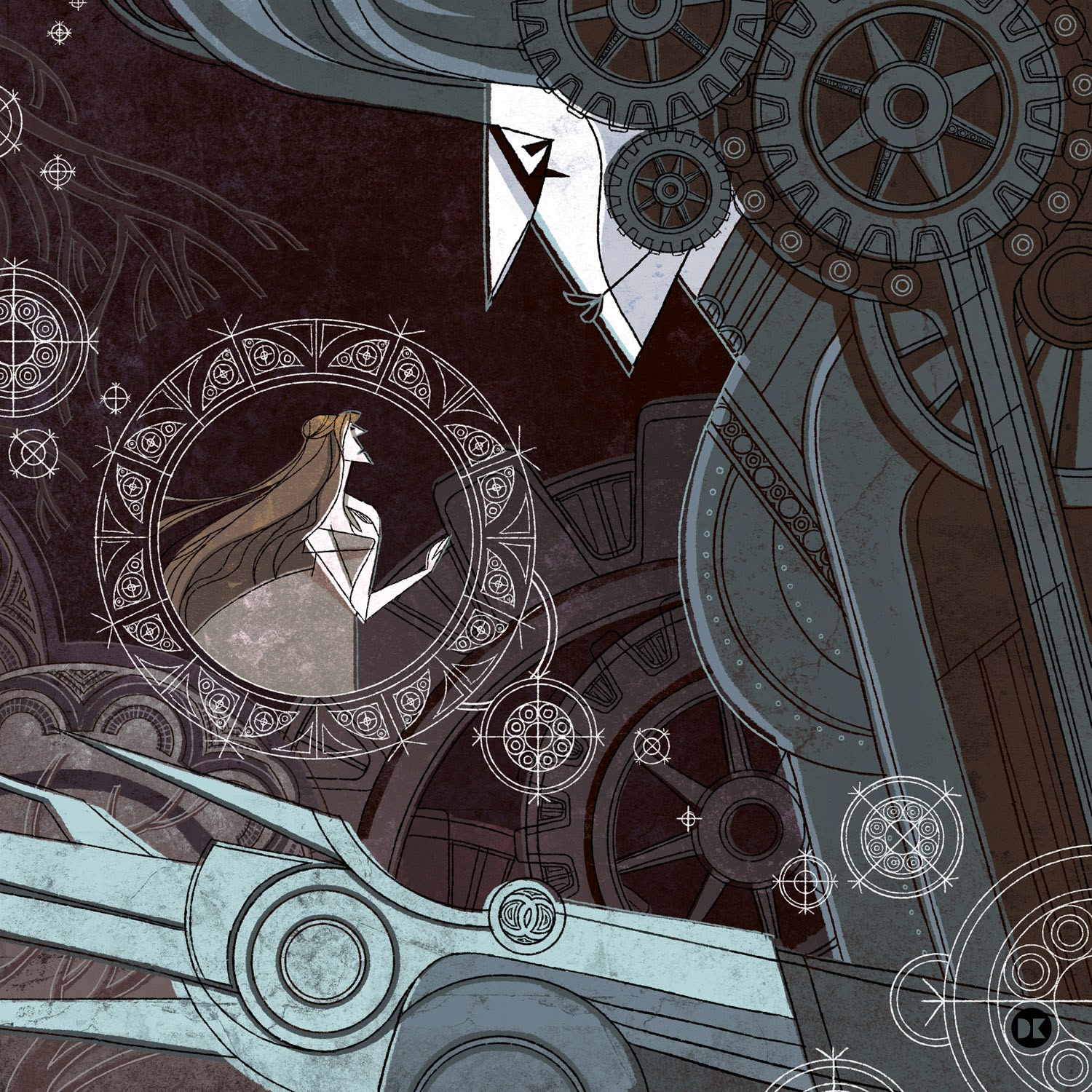 Few mounths ago I discovered Denny Khurniawan works, my first thought was "This guy will go good and far" and I'm so pleased that Denny could contribute to Scissorhands20th, his style feat perfectly with the story.

Sleep on a deer 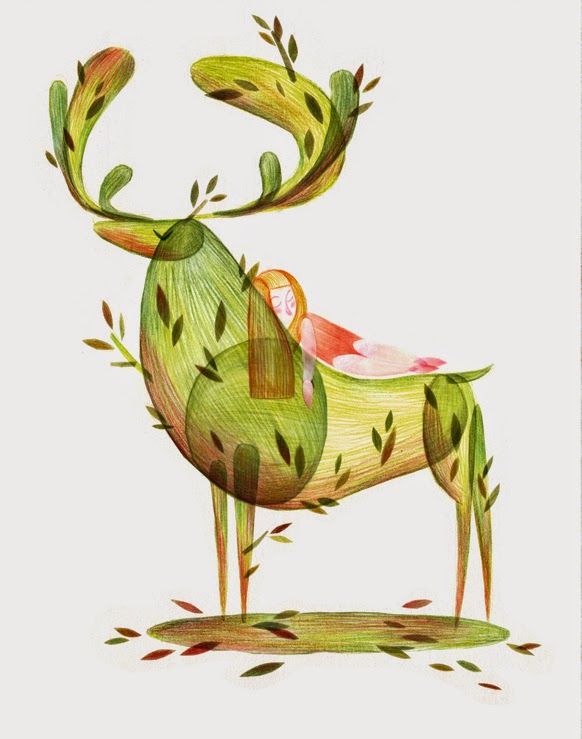 My dear friend Pauline Merlaut "Popiette" comes with a so sweet contribution! I love this piece, the shape and pencil colors are great. I invite you to visit the blog of the talented Popiette! 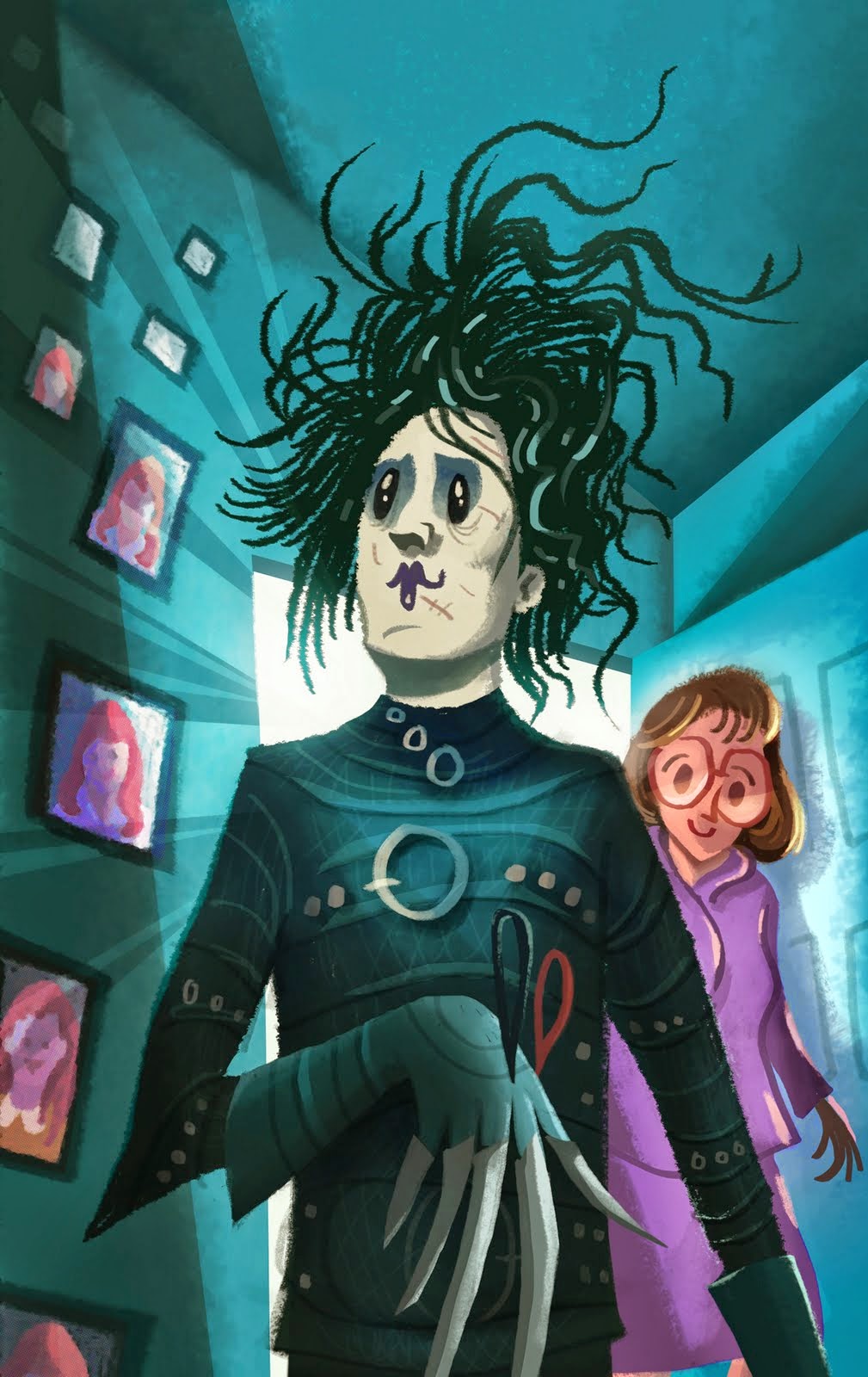 Justin Parpan is a unique artist and his work is really awesome! The feeling, shapes lights and colors of his contribution are simply great!! Don't wait any longer and visit Justin's blog! 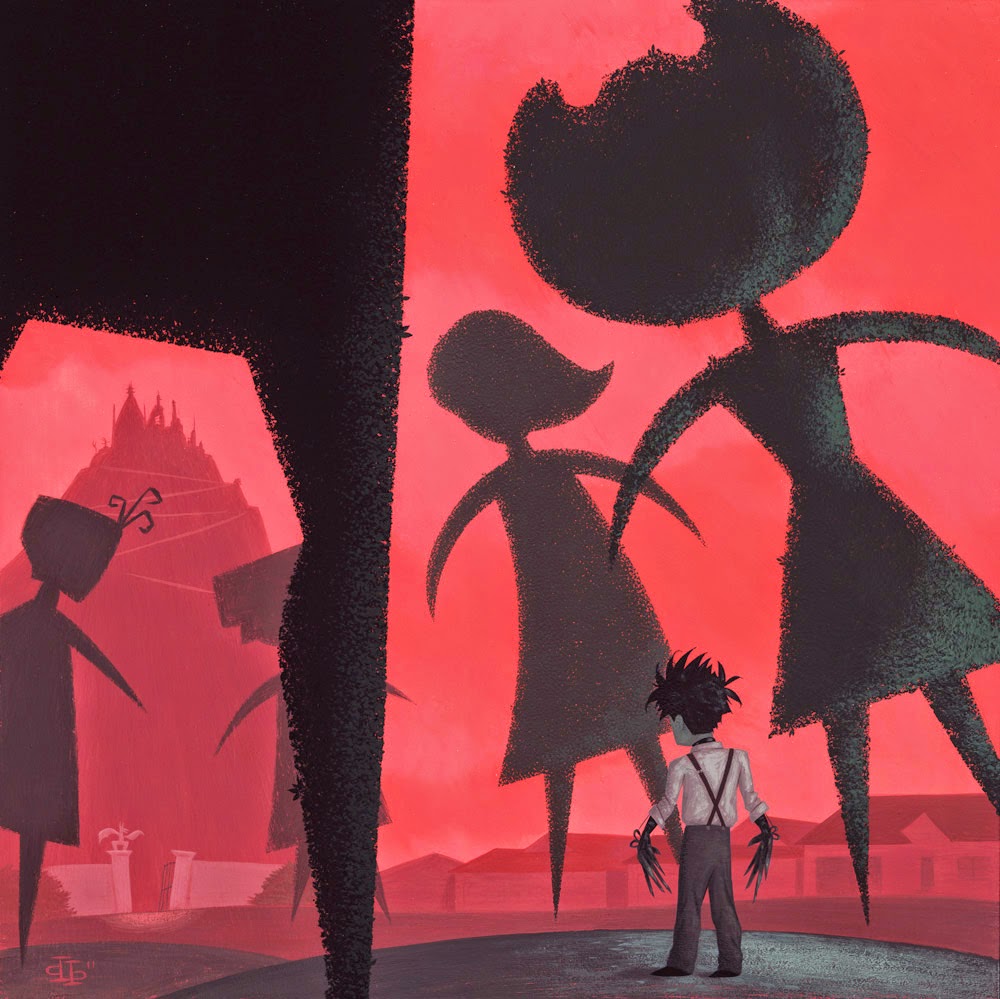 How I love Drake Brodahl's works! I'm so happy to have Drake contributing with this sublim and stunning cel vinyl acrylic on panel painting!!
Enjoy more at Drake's site and blog.

She never saw him again... 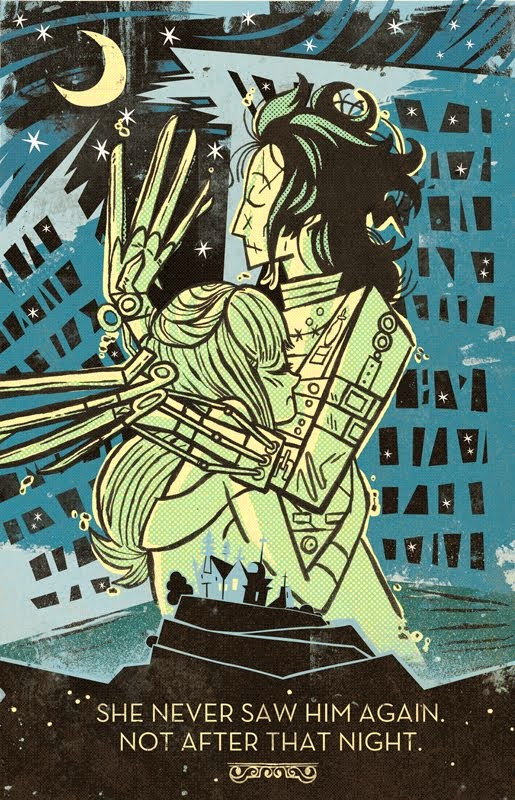 Bobby O'Herlihy is an amazing art designer and does such great stuff!! I let you enjoy his wonderfull contribution!
Be sure and stop by Bobby's Blog.

Birds of a feather 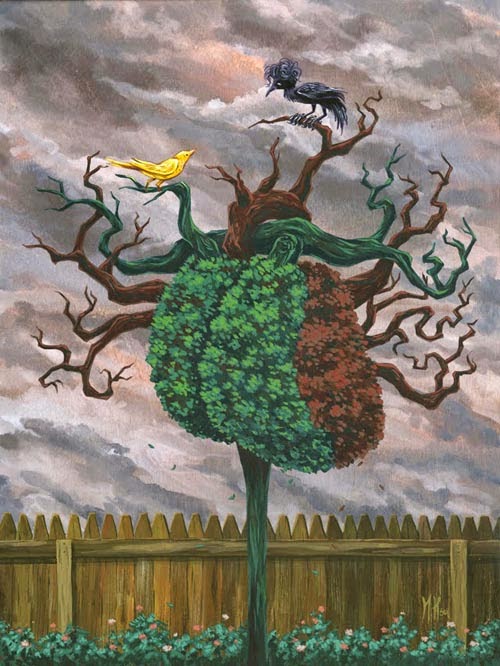 Martin Hsu is an fantastic artist and his contribution is just heart breakingly beautiful!! How I love this piece.

Be sure and visit Martin blog! 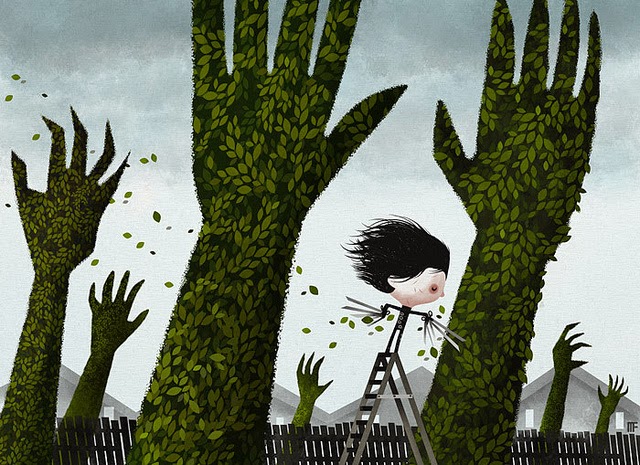 Michael Fleming is doing such great work and I'm glad to have Michael contributing!

His shapes and colors are delightful, I love it all! Enjoy the visit of Michael's site. 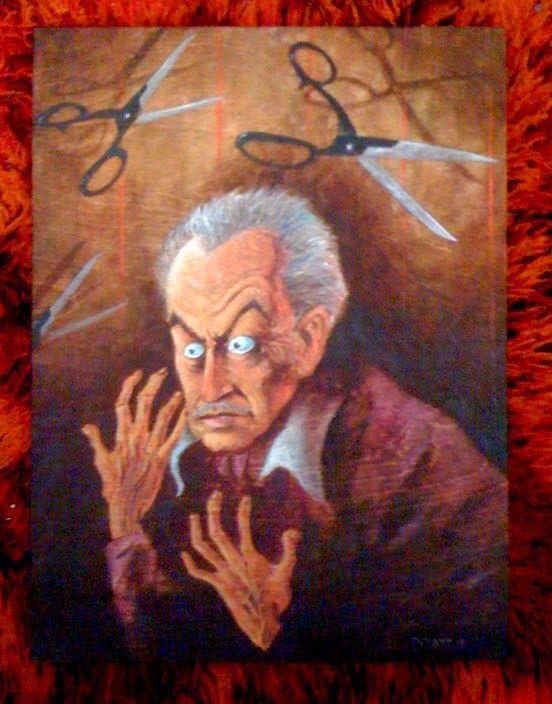 Drazen is a favorite of mine for a while now and the creator of the brilliant "The Happy Undertaker"series.


Be sure and visit Drazen over at his Happy undertaker and Hynotik Eye blogs.

Out in the cold

Edward under the snow

The talented Celine Loup is contributing with a beautiful tryptic! I love the style of this artist and invit you to visit Celine's site.
Thank you Celine!
Publié par Seb Mesnard à 14:14 0 commentaires

I really love the awesome stuff Alex "Xander" Leighton is doing with Mukpuddy and t's so cool to have this great Xander's version of Edward!
Swing by his blog to see more.
Thanks dude!
Publié par Seb Mesnard à 09:50 2 commentaires

Scissorhands 20th show at Nucleus Gallery
Hi everyone, I'm pleased to annonce the Scissorhands20th show at Nucleus Gallery!
Gallery Nucleus and I will be showcasing a selection of original works from the Scissorhands 20th blog. The exhibit will highlight the works of over 40 artists, including paintings, drawings, prints, sculptures, etc. and unite enthusiasts and fans in celebrating the 20th anniversary of Tim Burton's classic love story and its unforgettable characters; Edward, Kim, Peg and a band of colorful suburbanites.
Edward Scissorhands 20th Anniversary Tribute
April 16, 2011 - May 9, 2011Opening Reception / Apr 16, 7:00PM - 11:00PM
For more infos clic here
Publié par Seb Mesnard à 00:52 1 commentaires

Here is Cent Alantar's piece and his work in progress. Cent is a rare and so talended artist who worked as development artist at Disney in such project as Dali's Destino, Tarzan, Kuzco and Jungle book 2 and I was really happy when Cent told me he will be contributing.
Visit Cent's new blog.
Merci l'ami!
Publié par Seb Mesnard à 00:20 1 commentaires

Lorelay Bove is a great artist from Disney, I always loved her brilliant works and I'm honored to have Lorelay contributing with this marvelous serie of three paintings!!!
I invite you to visit Lorelay's blog for more wonders!
Merci Lorelay!
Publié par Seb Mesnard à 05:25 4 commentaires

Brigette Barrager is a such talented artist and I'm so happy to have Brigette contributing and what a contribution!
It's stunning and simply so beautiful!!
You can see her work in progress here and I highly recommand Brigette's blog.
Thank you Brigette!
Publié par Seb Mesnard à 04:01 2 commentaires

A magical contribution by Matt Saunders!
I really love the colors, shapes and details of this piece. I invite you to visit his Site to see much more!
Thanks Matt!!
Publié par Seb Mesnard à 03:35 0 commentaires

Josh Parpan is a unique artist... one of my favorite and I'm so happy having Josh contributing!
his piece is perfect!! Lines, colors, his Edward character is simply great and I don't speak about The cure dedicase ;)
As always visit Josh Parpan awesome Blog!
Thank you, Josh!
Publié par Seb Mesnard à 19:23 4 commentaires

Today Ludovic "Luché" Chesnot bring an delightful contribution! I love his technique all the details he put on this piece especially the reflects of the inventor and kim on Edward's body.

How happy I'm to have Lorena Alvarez contributing with this splendid painting!! Shapes, colors, everything is perfect!
Lorena is a fantastic artist and you can see much more on her site and blog!
Muchas gracias Lore!
Publié par Seb Mesnard à 20:54 9 commentaires

Andrea Kalfas is a wonderful illustrator and her "Ambrosia salad" is a sweet delight!!
I just love Andrea's work and I'm glad to show her contribution.
Visit Andrea Kalfas site and blog!
Thanks Andrea!
Publié par Seb Mesnard à 02:28 1 commentaires

Xavier Collette is a wonderful artist an today it's his turn to contribute, with this magic graphite piece!!
Just one step to jump into his awesome world!
Merci Xavier!
Publié par Seb Mesnard à 00:10 4 commentaires

Is a tribute for the 20th anniversary of Tim Burton's movie "Edward Scissorhands". This place will host a collection of artworks created by invited artists who will offer their own vision of this wonderfull and unforgettable fairy tale.
This tribute is dedicated to the memories of Vincent Price and Stan Winston.
scissorhands20th@gmail.com